Billboard reefers have facinated modelers over the years.  They were colorful and interesting in the advertising that appeared on their sides.   They were outlawed in the 1930s but made an appearance again in the late 1940s.

I am presenting the late Jim Hickey’s scratchbuildt Morrell Pride car.  He used styrene as his primary medium.  The decals were also the work Jim.   Some of you may be aware the Jim Hickey once produced a line of decals under the name of Protocals.  While the decals were discontinued years ago we are fortunate that the original artwork was provided to Norm Buckhart.  Another example of Jim Hickey’s billboard work is shown below.

The next generation of billboard advertising started to appear of wine tank cars in the late 1930s.  It was not quite as elaborate but still attention getting

In the postwar era, Gibson, Chateau Martin and Ambrose wines used their leased cars to draw attention to their products. 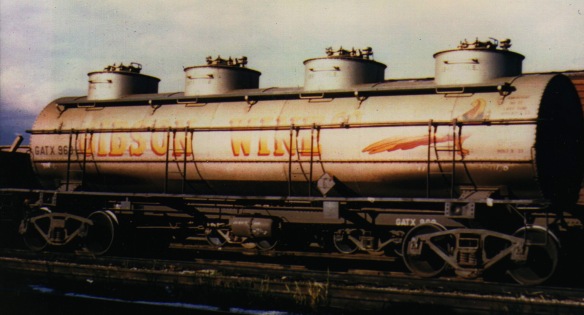 The picture below is a tank car with glass lined tanks inside the steel or wood body.

Meat comanies picked up on the idea and applied it to meat reefers.

That is all for now.  We will get back to the NP automobile car build next time.