Ross Dando showed me a picture of a tool maker vise that looked really useful.   I did a little searching and found the vise available from several sources such as Amazon.   They range from two inches up to six inches.  I purchased a  two inch remanufactured vise from Amazon.   The tool maker vise is different compared to my old Unimat vise. 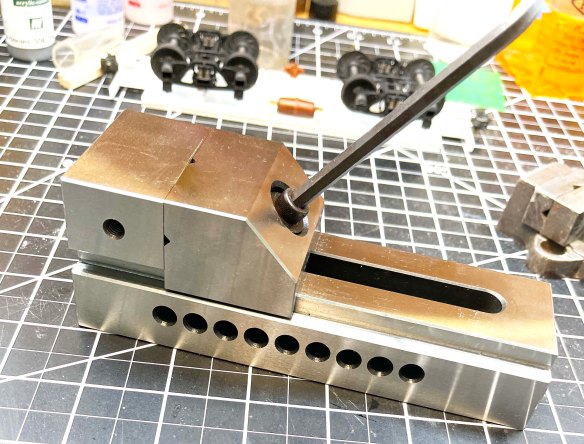 The topside looks similar to a conventional vise.  The allen wrench tightens  the jaws over a limited range.  There is a mechanism on the underside that allows you to make large changes in jaw location.  A toggle engages a series of notches that the right jaw is moved to the closest notch.  You can tighten the jaws with great precision and power.  It is easy to flatten brass wire or hold a part firmly for fabrication work.

This vise a useful tool.  I really like it.  Thank you Ross.

Here is my old and trusty Unimat vise.  I purchased  an Unimat lathe in 1968 which came with this old vise.  Time to retire this old friend.

The Northern Pacific Railway Historical Association (NPRHA) commissioned a small company to produce a nifty signal bungalow that appeared along the railroad lines.  The prototype is based upon a General Railway Signal design that held relays and other electrical devices to support the railroad’s signal system.   The NPRHA developed the structure in HO and O (1/48). 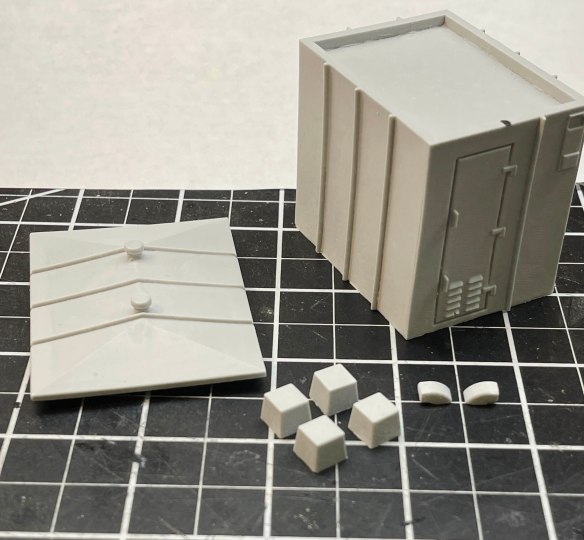 The picture shows the components that create the bungalow.  All are resin cast from 3D printed designs.  The building consist of a one-piece body, roof, concrete footings and two vents.  I just received the little kit and haven’t had a chance to finish it.  The picture below shows the bungalow near the baggage car.

They will be available shortly throught the society’s website. The expected price will be $22 for a pair of these nifty buildings.   I will let you know when they are available.  General Railway Signal products were used by a number of major railroads so the bungalow has many applications.

1 thought on “NEW STUFF: New Tool for my Bench and a Signal Bungalow is”