My friend Rick Leach is busy building his dream railroad in P48.  As many of you know, Rick is a serious student of the Northern Pacific Railway.  He has been able to access large amounts of railroad data and become friends with some NP railroaders.   The picture below shows Rick hard at work applying new lettering the a recently refurbished NP caboose located at Toppenish, WA.  One of Rick’s great skill and knowledge is the design and use lettering on everything Northern Pacific.  He has shared his vast knowledge with Dean O’Neill at the Northern Pacific Railway Historical Association.  This has resulted in the creation a signicant number of highly accurate decal sets for modelers. 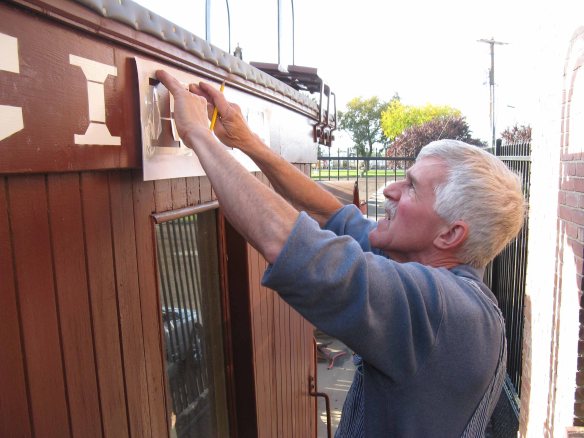 He is building a railroad based upon the NP mainline and branch in the Cle Elum, WA area.  Rick is very interested in the short branch that ran up to Roslyn, WA.  There were coal mines operating for a long time in this area.  The NP hauled a bunch of coal off this line for use as locomotive fuel and for commerical customers.

Railroads were initially build with rough hewn ties.  They were not the uniform shape and size of traditional ties for thoughout the country.  Many of these ties were cut from tries like Oak.  You could find these ancient for of track components on secondary lines and passing sidings.   Given the light usage of the track they tended to last much longer than conventional ties.   Rick is going to add a mix of 20% rough hewn to standard ties.  The photo below shows a couple rough ties in use on the NP Wilsall branch in Montana.

The following photos were provided by Rick Leach.   Thank you for sharing.

This shot illustrates the rounded edges of the oak ties.

Modeling these vestiges of earlier days in railroading requires a little whittling on wood to create the less than perfect shapes found these ties.   Rick cut some ties that were close to 12″ scale wide.  At this point he started to whittle with an Xacto knife with a hooked blade.

Uniformity is not the goal but keep in mind that you still want to spike a flat surface.

If you look closely you can spot the hand hewn ties mixed in with the dimensional variety.  Rick is taking a path not often followed.   Not every railroad would still have these ties in use during the late steam and diesel era.    On the Northern Pacific they were more prevalent on the “dry side” of the Cascade Range.  As you may know the west side of the Cascade mountain range receives a significant amount of rain/snow which likely accelerated the demise of vintage ties faster than on the eastern side which is decidely dryer.

Hopefully we will be able to follow the progress of Rick Leach’s Proto48 railroad.