I have decided that it is time to build a freight car and take a break from spiking track and installing switch motors.  My project came about as a result seeing a new 3D part generated by a very talented modeler in Austria.  Sarah Griessenboeck is the designer and the project is a Pullman door for the 1923 ARA steel boxcar.

So here is the door: 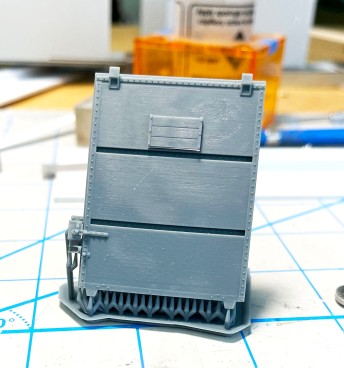 The door was also referred to as the “builder’s door” in ARA literature.  Sarah did an excellent job on capturing the design.  I downloaded the data file from her website called https://trainkitchen.com/atlas-1923-ara-boxcar

The 1923 ARA boxcar is nearly identical to the PRR X29.  Atlas has produced an excellent scale model of the X29 which is my launch point for the build. I decided to build a version of this ARA steel boxcar.  My go-to source for new projects is usuallly the Railway Prototype Cyclopedia series of journals.

I discovered that the Chicago Great Western ARA cars were unique in several respects.  The location the side posts are different from the PRR X29 cars.  That changes the location of the alterating row of rivets that are parallel to the rivet line on the plate seam. Steve Hile was kind enough to provide this picture which I modified with some annotations.

The other significant difference is the truck spacing has been reduced on the CGW car to 31’2″.  For me that suggests building a new underframe.  You may elect to not make this change for the reduction of 12″ in the spacing.  It does change the appearance of the car with reference to how close the wheels are to the end.

My construction project addresses these major areas of difference with the Atlas X29/1923 ARA model.  We will start with the underframe. 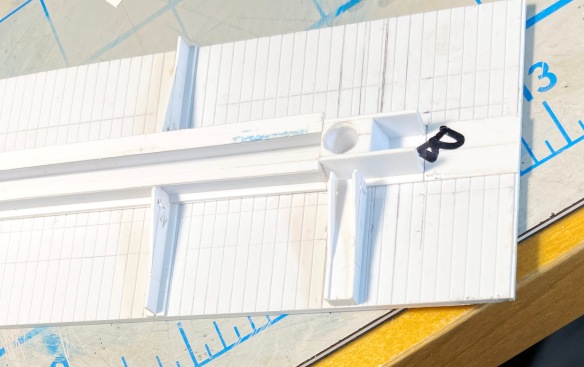 The underframe is composed of a sheet of .040″ styrene laminated to a .040″ Evergreen styrene scribed with .100″ grooves.  There is a .020″ plate that runs the full length.  It is 20″ wide.  The centersill is composed of two 12″ Evergreen channel that have been modified with a piece of the channel cut from the channel material.  The prototype used a 7″ wide and 12″ tall shape.  The addition of the inside flange widens the Evergreen shape to 7″.

I cut the bolster and crossbearer sides from .020″ styrene.  A filler strip was added to create the basic width.  The bolster plate which would rest against the floor is supposed to be 15″ wide.  I elected to add rivet strips of .015′ styrene on either side to form the basic shape.

I added a Protocraft bushing and plate to the centersill.  The bolster lower sheet was something left over from a very old Des Plaines X29 I did in the dark ages of resin.

The bolster the basic end design reveals the bolster and crossbearer profiles. 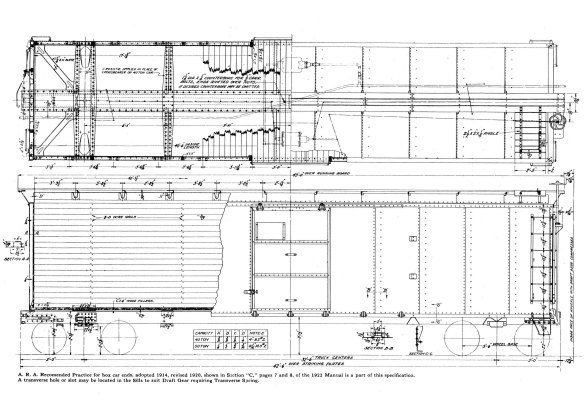 The top down and side view relveals that the car lacks the stringers that the Atlas frame has.  In fact the basic X29 lacked stringers.  The express version added the two stringers per side like more modern designs.  Unfortunately Atlas picked the least useful underframe design.

There were six lots of 1923 ARA cars built for the the Great Weedy (CGW) by Pullman.  I picked the last lot to build since it came with AB and two side grabs.

Next time i will finish up the underframe and move on to the Atlas carbody modifications.

Thanks for stopping by.

3 thoughts on “MODELING: Time for a New Build CGW Part 1”