Skip to primary content
We are pleased to sharing this novel technique for aging/distressing open top cars like gondolas and hoppers.  Railroads historically have hauled various commodities in gondolas which subjected the side and floors to significant damage.  Many times the loading and unloading process dinged up the car badly.

The following description is from Lee:
I have always wanted to show the physical weathering so evident on gondola sides. I think every modeler has taken the old soldering to heat and distort (usually destroy) an old plastic car. I have had better luck with taking old Max Gray and USH brass cars and beating them up with various tools from the inside but that technique limits you to brass cars only and a sixty dollar experiment is easier to stomach that to start beating on a $350.00 Protocraft car!

In looking at worn gondola prototypes it occured to me that the bulging and denting is a cumulative process spread out over many loads. I had the idea of using thin aluminum foil to represent the damage by denting the foil and gluing it to the car sides between the ribs. Years ago I had bought a three pack of resin Funaro and Camerlingo NYC rebuilt gondolas for 20.00 (less than 7.00 a car!) so one was chosen for the experiment. I used waterproof yellow wood glue as the adhesive because it is somewhat bulky and really attaches quite strongly to smooth materials. The panels were precut and damaged and then applied over a coating of glue, burnishing down the edges first to trap the glue under the foil to bulge it out. So far I am pleased with the results but see where improvements could be made. I tried to use the foil over the existing side sheet rivets but they aren’t as sharp and distinct as they should be, maybe better to use Archer rivets but I’ll wait until the car is complete and weathered to see how it looks. 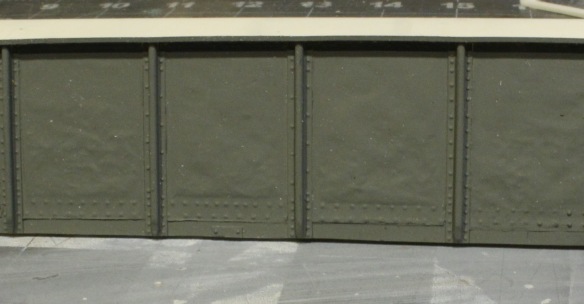 As we all know modeling is a series of compromises, what we find acceptable or good enough. To take this idea to the extreme would involve scratchbuilding in brass or possibly styrene to do it as close to the prototype as possible. This experiment is to see the merits of using an existing kit to achieve the look without the time or effort of scratchbuilding one car. It is compromised as it only will show on the outside and the car will need a load to hide the interior but it hopefully it will make for a very realistic finished car. The two pictures show a car side with and without a primer coat. I think so far it looks promising.
(The picture shown below was taken by Rick Leach after he had applied new lettering to this classic drop bottom car located in Toppenish, WA.  Rick has applied his lettering talents to more than scale railroad lettering by making stencils based upon actual prototype lettering guides and photographs. ed) 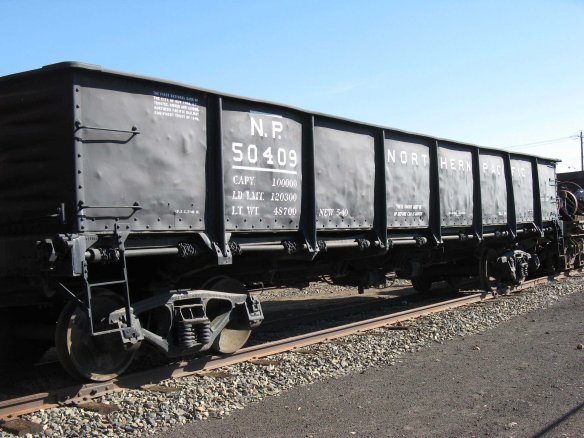 As good modelers, as we all are, we must push the boundaries of what is possible for our own satisfaction and continuously  improving our skills. 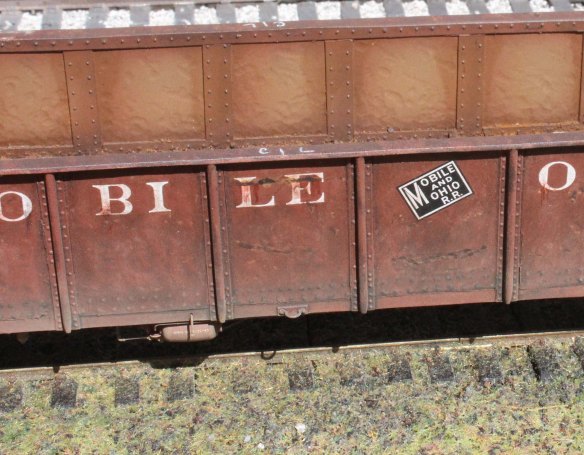 This is the final of the experimental weathering of a gondola by added overlays of thin aluminum foil to replicate the denting and bulging of the side sheets on a well worn gondola.

Here are images of the finished project, could it be improved upon? Certainly! If I were to do another car with this technique I would try 24 hour epoxy rather than wood glue to attach the side sheets and sand off the bottom rows of rivets to replace with Archer rivets. Since the original kit has flat castings and Murphy ribbed ends with no interior detail I scratched new ends out of styrene which also served to back date the car some. The inner sides still needed detail other than the separate resin splice plates so I marked the location of the splice plates and then bounced a round carbide cutter chucked in my Dremel on the inside to obtain outward denting effects. 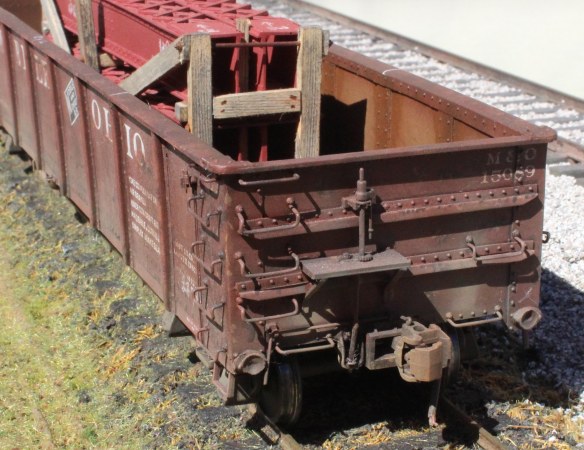 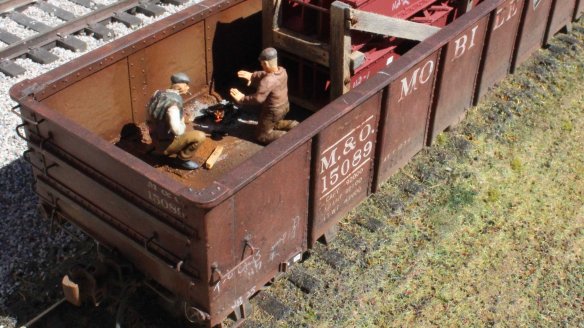 I’m a sucker for “Forgotten” road names so the car was painted and lettered with a K4 decals set for a M&O gondola. The M&O survived until the 1940 merger with the Gulf Mobile and Northern to make the Gulf Mobile and Ohio railroad. Weathering proceeded with washes to darken the exterior low spots and dry brushing a lighter shade of the base coat to highlight the raised areas. Rust chipping was added afterwards with Vallejo cork brown with hull red for the darkest rust. For rust and debris I ground up real rust from my son’s old pickup that saw 20 years of salty Michigan winters. I added  scraps of wood, paper and real dirt for additional debris which was attached to the floor with Mig products Pigment Fixer. A load was fabricated from resin cast girders to be shipped to a Roosevelt depression era NRA grade separation project. 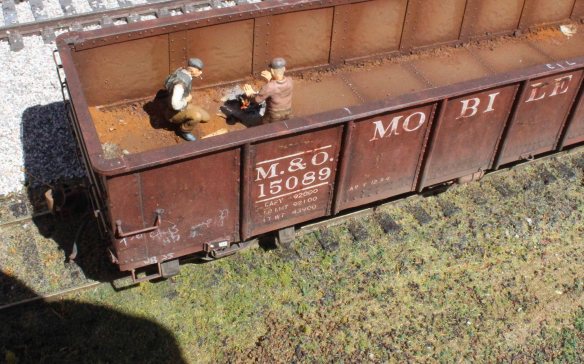 Never one to leave well enough alone I made the charred remains of a old hobo campfire made for warmth. That led me to look for some figures to bash into a pair of  hobos trying to keep warm, hey this is a car built as a mid thirties depression era piece so how fitting! While looking through my “Dr Frankenstein” box I found a standing Preiser figure who bore a resemblance to Lee Marvin, then it clicked! The 1970 movie Emperor Of The North starred Lee Marvin as the top hobo A#1 who battles with the conductor played by Ernest Borgnine. A little looking on the internet turned up color stills and even multiple shots of Lee Marvin’s costume which allowed me to replicate the clothing colors. I converted the figure with a crouching figure from the waist down from the 1/48 Hasegawa USAF ground crew set. The other figure is also primarily a figure with repositioned arms from the Hasegawa set. It would have been futile to have them trying to warm over a cold fire so a little red/orange/yellow brought the fire to life.

Now the car represents a place in time in US history, kind of like a mini diorama in a freight car..
I want to thank Lee for sharing his technique and photos of the model.  Once again he has pushed the boudries of modeling with this novel method for adding realism.
Best Wishes,
Gene
Advertisement